Timberline had the pleasure to interview Dr. Brian Bergamaschi, a research biogeochemist of USGS California Water Science Center and Adjunct Faculty at California State University Sacramento. Dr. Bergamaschi received his Ph.D. in Chemical Oceanography from the University of Washington, in Seattle, WA, where he specialized in analyzing the sources and fates of natural organic material in the environment. Dr. Bergamaschi explained to us some of the environmental changes happening in California’s waters right now, what they mean, and how his research team analyzes them. To learn more about Dr. Brian Bergamaschi, continue reading and then visit his profile at USGS.gov.

As most people know, excess nutrients in lakes, rivers, and other natural waters are a problem. Nutrients are essential for plants and animals to grow, but an overabundance in nutrients can cause a variety of problems. We are grappling with some of those problems in the San Francisco Estuary.

For the watersheds that empty into the SF Estuary, during the dry season – most of spring, summer, and fall — the largest source of nutrients is effluent discharged by wastewater treatment facilities. We are particularly focused on this source because the amount of wastewater discharge will grow along with future growth in the population. While it is possible to remove nutrients in the wastewater treatment process, it is expensive to do so – the cost of which is borne by the people that live there. Our research is focused on trying to trace the role and fate of wastewater-derived nutrients to help assess the amount of nutrient addition that is needed to support the ecosystem, and the amount and forms of nutrients that may be harmful to those ecosystems – what is the Goldilocks nutrient release rate?

The Costs of this Threat 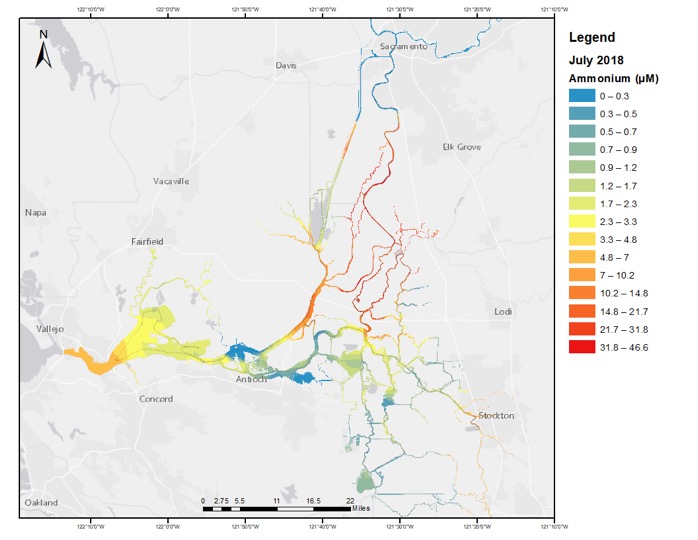 We’re trying to provide reliable, fact-based data for policymakers to evaluate the cost-benefit of implementing regulations that require the wastewater dischargers to spend the money to reduce their nutrient loads or not. Recently, regulators in the state have required that nutrient discharge be lowered to a level that necessitated a multi-billion dollar upgrade to the existing treatment plant, slated to come on-line in two years. The ongoing treatment process is expensive as well, so there’s a real need to understand the effects of nutrients on SF Estuary ecosystems so managers can make appropriate way.

Nutrients have been implicated in recent precipitous declines of some listed and endangered fish species in the estuary. Particularly one called the delta smelt. Fish biologists have found that the fish are essentially starving because of a very low abundance of food available to them.

So researchers dug into the decline in the food supplies for fish: — zooplankton – and found that they, too, were also suffering from a lack of their food – phytoplankton. This is where nutrients come in. While sufficient nutrients are needed to allow phytoplankton to grow, a very prominent researcher at SF State University, Richard Dugdale, and others have shown that the presence of ammonium in surface waters above a certain level causes a decline in the production of phytoplankton as well as gives a growth advantage to types of phytoplankton that make poor food. In part, those findings are what lead to the wastewater treatment plant upgrade.

How are you measuring ammonium in the water?

To assess effects, we have worked with Timberline to develop a field-portable ammonium analyzer.  We use that instrument in a variety of ways. This is a huge improvement over collecting discrete samples and sending them in for analysis. There are problems with that method. One of them is that it takes you a long time to get the information back. Therefore, what you want to do is recognize the environments your in when you are out in the field so you can sample them appropriately. You can’t wait for those two weeks because the situation will be completely different when you go back. This area is completely tidal, so you can come back 2 or 3 hours later and the ammonium concentration will be completely different; 2 or 3 weeks is a different universe.

To assess the spatial distribution of ammonium across the estuary, we mount the ammonia analyzer on our boat and cruise along 25 or 30 knots. We have a system that continuously brings water on board and we sip off the continuous flow-through system with the Timberline TL-2800 and continuously measure ammonia. We don’t have to wait – we get the results in real-time — plus we get continuous measurements of ammonia so we can see how the concentrations vary at a very fine spatial scale. If we pass a place that emits ammonium, we can recognize it immediately and go back and see what it is about that place that we think is important for it to be contributing ammonium to the environment.

Another way we use the Timberline analyzer is to measure how much ammonium is going into our boat and coming out of the bottom. This is critical for figuring out the fate of wastewater ammonium in the estuary. Lots of things can be going on. Clams, which we have a lot of in the estuary, excrete urea, which rapidly converts to ammonium in the environment. Ammonium can also be formed in bottom sediments depleted in oxygen. Therefore, we need to distinguish between the wastewater derived ammonium and the clam or sediment derived ammonium. To measure the rates of uptake or release from the bottom, we built a big chamber that we stick down on top of the sediment. We circulate water from that chamber back to the boat and we can measure how the concentration of ammonium changes over time by calculating the amount coming from or going into the sediment.

Early on, using the Timberline in our open boat, we had contamination issues because ammonia in the air got into our reagents. Now, by putting all the reagents in bags, the whole system is closed and we feel that we can confidentially measure ammonium concentration differences in the μM range. By being extra careful we can distinguish between a .5μM and 1μM, which is fantastic in a lab. But the ability to do it out in the field is just amazing.

Another concern we are researching is mercury in the environment. Mercury is not particularly toxic in its elemental form. It’s when it turns into an organic form — mostly methylmercury — that it becomes a problem. This frequently happens in wetlands because the conversion is carried out by bacteria that live in environments low in oxygen., like in wetland soils. The tides can then bring that methylmercury out to the open water where it can be taken up by phytoplankton and then up the food chain. I’ll note that the two different research threads are related —  it all has to do with wetlands and tides.

Another issue that we have pursued throughout the years deals with wetland carbon. Carbon is removed from the atmosphere by plants, and can be stored for long periods of time as plant remnants in soils and sediments. Globally, most of the carbon stored outside the atmosphere in soils is stored in current or relic wetland soils . What that tells us is that if we want to use natural systems to help mitigate the CO2 rise in the atmosphere, one place we can look that would be effective is using wetlands to help store carbon in their soils.

So one of the threads of our research has been to look at the uptake of carbon by wetlands and then the long-term storage that carbon. It’s not only that you need to pull it out of the atmosphere right now, but you need to store it in a place that is away from that atmosphere and it doesn’t turn back to carbon dioxide within a hundred to two hundred years. If we can slow down the rise in atmospheric CO2 long enough, if we can mitigate it some, then larger natural processes will pull it down in other ways. But we need to survive over this near term so we can get to where that long term process kicks in.